You will NOT read or see this story in the MSM – what with all this IMPEACHMENT BS goin’ on everyday.. but my electronic staff found and brought in this important story!! Way to go guys.. 😊

Russian intelligence sources have claimed that Michael D’Andrea, head of CIA operations in Iran and who orchestrated the assassination of Iranian General Qassem Soleimani, was killed in a US spy plane downed yesterday in Ghazni, Afghanistan.

The plane with US Air Force markings reportedly served as the CIA’s mobile command for D’Andrea, who earnt several nicknames including: Ayatollah Mike, the Dark Prince, and the Undertaker. He is one of the most prominent CIA figures in the region, appointed head of the agency’s Iran Mission Centre in 2017. Under his leadership, the agency was perceived to take a more “aggressive stance toward Iran”.

The Taliban claimed to have shot down the plane but have yet to provide evidence, whilst the US has denied the claim but has acknowledged the loss of a Bombardier E-11A plane in central Afghanistan. Graphic images online have already circulated purportedly showing some of the charred remains of those on board. 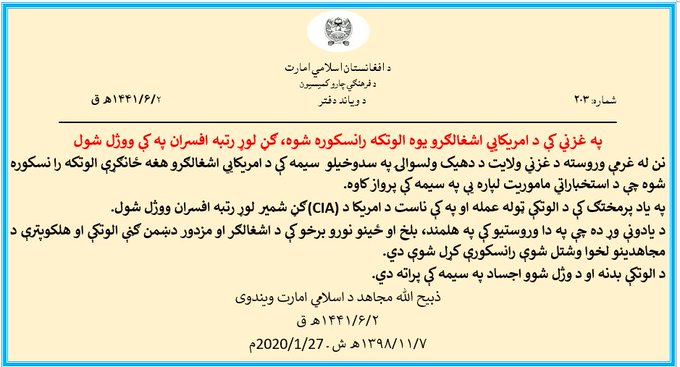 167 people are talking about this

Unconfirmed reports that the CIA head of anti-Iran operations, Michael D’Andrea aka Ayatollah Mike, was on board the plane that crashed near Ghazni, Afghanistan this morning.

D’Andrea also masterminded the murder of Imad Mughniyeh, former Hezbollah Chief of Staff, back in 2008.

821 people are talking about this

Afghan authorities initially claimed the plane was a state-owned airline, but this was denied by the company, Ariana. Helicopters have been brought down before by the Taliban, but they are not believed to have the capabilities required to bring down a high-flying aircraft.

READ: The truth about US casualties in the Iran attack is slowly coming out

It has been speculated that Iran’s Islamic Revolutionary Guards Corp (IRGC) may also have a hand in the incident, especially as anti-aircraft support has previously been given to the Taliban. Additionally, the Afghan Shia Fatimyoun Brigades, who are trained by the IRGC, also have a presence in the country.